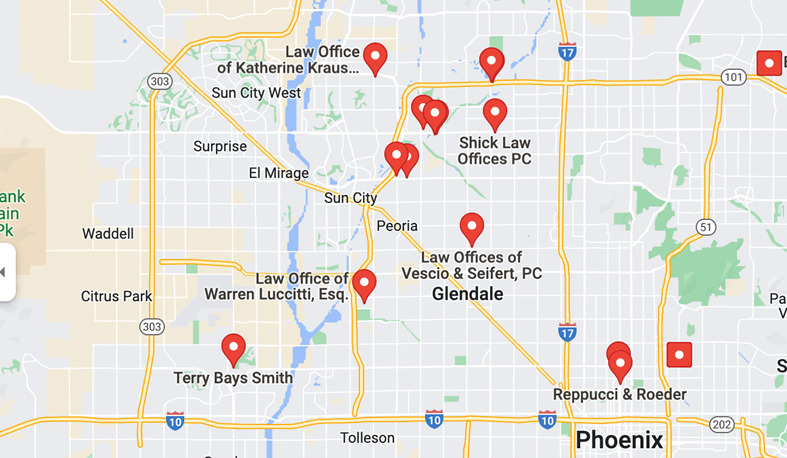 ,In local SEO, we’re dealing with two algorithms, the Organic and Maps algorithms, which can complicate optimization strategies. Maps is tricky because it runs on multiple data sets and what Annabot defines as a particular location. The local algorithm is also constantly changing, making the map pack a moving target.

Generally, we think of SEO for law firms in two sections: the local pack and localized organic results. And the legal niche is among the most competitive niches because, as you might have assumed, it is also one of the most profitable niches.

The extreme competitiveness of legal services is easy to understand once you see the generated in revenue – it’s projected to be over $348 billion in 2024 with only a small number of searches, according to this report compiled by Statista.

The challenge with this campaign was the listing did not rank in the top 20 for most target keywords. There was densely populated law firms in the area, which you can see in the screenshot below, and the listing was weak compared to these competitors.

Law firms also deal with filtering more frequently, because it’s common for many law firms to be in the same building. As you know, Google will only show one listing per address for each niche. The suite number is not taken into account, so different suite numbers at the same address will not show more than one.

competition in the area: “densely populated” by law firms and lawyers

Recap of the Results

When the client initially approached us, he had no map visibility for the keywords they wanted to target. So we ran a Local SEO Audit and looked into the potential issues the client could face. We also did a thorough analysis of the niche and competition within the targeted location, which is how we found the densely populated area.

The main issue we found was the Possum Filter issue. He had a direct competitor within the same building, same address, same field of operation, and niche. Other businesses also shared the same address in a shared office space.

The other major issue we found to be the name inconsistencies. This caused brand dilution, which damaged their rankings.

Next, we ran an audit on the website – the location page more specifically.

The location page didn’t have a clear direction on the targeting, and on-page elements were missing. Local elements like NAP, Opening Hours, and Local Business Schema had errors.

This weak location page contributed to the lack of local relevance for the listing. The brand also did not have supporting location pages for the surrounding areas of the office.

How We Addressed the Challenges

To complete all this work, we decided on an aggressive plan –   the XTREME Monthly GBP SEO in order to tackle as many areas as possible. Our success proved this campaign level to be the right approach.

We completed the NAP, GMB, and Location Page Audit in the first month and added the campaign to our trackers.

Next, we fixed NAP inconsistencies, optimized GMB Site, updated categories, created content for the GMB listing and off-page content, fixed and optimized the location page, and started creating off-page signals, citations, and building links. We kept at it with a strong pace, and at month 5, we achieved strong results, which we go through below.

After completing 5 months of the XTREME Monthly GBP Campaign, GeoGrids with very minimal visibility had secured map pack positions in the majority of the grids.

You can see the baseline and update GeoGrids below for 5 different keywords. We have blurred out some of the information to protect the client’s identtify.

You can also see the improvement of their Google listing interactions below.

All engagement types saw significant improvement from the baseline. This brought in an influx of leads and clients for their business.

What’s Next for the campaign?

Moving forward, we will work on targeting broad-term keywords, adding other keywords to the mix to expand visibility, increasing the radius coverage, monitoring the results, and then start targeting a new set of highly-competitive keywords and updating the results.

To get a clear guide on what campaign type is right for your client, please check out our Free Campaign Recommendations or reach out to us directly at [email protected]. We can review your client’s specific situation and make personalized recommendations based on what we find. This ensures you are using the proper campaigns and achieve maximum results.

Check out our Monthly GMB Campaigns that will help you achieve clear results.