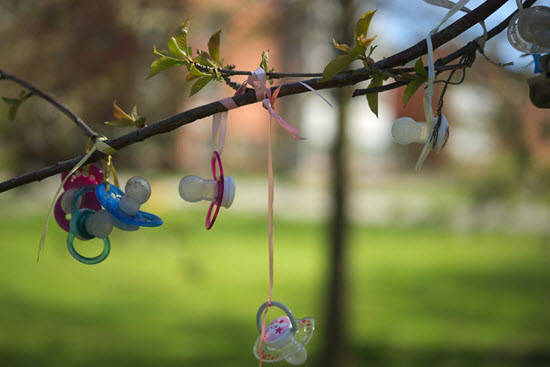 Any restricted terms that find their way into your website’s source code can cause Google to disapprove your Google Ads (AdWords) ad – even if you didn’t personally add that content to your site.  That’s the short answer.

“Banned” terms that show up on your Google My Business page (like in your description) or on Google Maps (in the form of Google reviews) won’t prompt Google to pull your ads, as long as that content stays on your GMB page(s) or in your reviews.  You run into trouble only if a person or piece of software puts even one of those restricted terms onto your site.

By the way, I find it tiresome to call them “restricted terms” or “disallowed content” or whatever constitutes Google’s huge no-fly list of search terms in AdWords.  So from now on I’ll just refer to them as BAdWords. 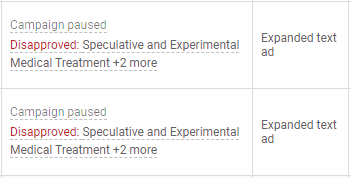 Beware review widgets – at least the kind that “streams” online reviews (like Google Maps reviews) and sticks them onto your site in any way.  That was the toe-popper one of my clients and I stepped on recently.  The widget automatically embedded the content of my client’s patients’ Google Maps and Facebook reviews onto his site.  The content of the reviews wasn’t visible ON his site, but the widget would update the star rating and review count as patients wrote new reviews.  I never cared much for the functionality of that widget, but it didn’t seem to do harm, so we kept it around on the site.

This particular review widget wasn’t a problem for several years, until a patient mentioned a certain medical procedure by name in his (5-star) Google review of my client.  The BAdWord in this case was the name of a therapy that everyone has heard of, but that some people have held objections to for many years, and that some shady characters have given a bad name in recent years.  Places like the Mayo Clinic (what do they know?) offer the procedure, but that didn’t matter to Google.  Soon after the patient wrote the Google review, the widget picked it up, the BAdWord showed up in the site’s source code, Google detected a BAdWord in the source code, and 11 of our ads went to nap time.

The solution was to remove the review widget.  If you run into the issue I described, that’s probably the solution for you, too.

Also beware the difference between what’s indexed in Google and what’s in your site’s source code.  A “site:” search operator won’t necessarily turn up the phrase(s) over which Google has pulled your ads.  The source code can contain a BAdWord that isn’t in Google’s cache, but that the Ads department knows about anyway.  I found that out when a site:exampleclientssite.com search didn’t turn up the BAdWord that caused our ads to be pulled.  It was only when I viewed the source code that I found the term in the review widget that pulled in the Google reviews.  So if you’re a “local” business that just got hit with an AdWords ad disapproval you can’t figure out, and you’re checking your site for BAdWords, don’t assume a site:yoursite.com search will turn them up.  You’ll need to scour your Google Maps reviews, too.

By the way, this isn’t too related to GMB or Google Maps, but also beware your outbound links.  One of the BAdWords that caused Google to disapprove my client’s ads was in the URL slug of a site my client linked TO.  In other words, Google didn’t like the name of a page on a site we linked out to.  For Google, everything in your site’s source code is fair game, and one BAdWord anywhere can trigger a disapproval.

If you’re corresponding with a Google Ads support rep (as I imagine you are), be sure to ask for the specific pages on your site where restricted terms supposedly lurk.  Then view the source code of those pages.  From there, finding the culprit should be pretty easy.

Once we got rid of the review widget that pulled the BAdWord into the site, and we removed that one pesky outbound link, Google reinstated our ads (after some back-and-forth, of course).  Didn’t change a thing on the Google My Business side.

The link between GMB / Google Maps content and Ads disapprovals is your site.  Any GMB / Maps content that doesn’t find it’s way onto your site (destination URL) won’t result in an Ads slap.  I can tell you first-hand that including restricted terms in your Google My business description and “services” section doesn’t trigger a disapproval.  I assume that is also true of GMB “products” and posts, though I haven’t tempted the gods by testing out either of those.  BAdWords in Google Maps reviews also don’t trigger ad disapprovals – again, as long as those reviews don’t make it onto the website you use for Ads.

Last but not least, a Google Ads disapproval won’t cause a Google My Business suspension or other penalty.  Of course, it’s always possible to do something that’s against both Ads and GMB policy (like promoting an illegal product or service), in which case maybe you can manage to get yourself in trouble in both places.  But a Google Ads slap by itself won’t provoke a GMB slap.

As Google continues to smoosh pay-per-click and GMB together and push more “local” businesses into advertising, I expect more business owners to run into infuriating problems like this one, where you’re in the odd position of being able to promote a service or product on GMB but not in Ads, or vice versa.  On the plus side, I’ve long found the Ads support staff generally helpful , whereas GMB “support” ranges from useless to nonexistent.

Have you run into any Google Ads problems that seem to tie in with GMB, or vice versa?  Leave a comment!